Appointed early 2018, WBA were the Interior Design Consultants for the internal fit out of a new rural office building on the Broughton Hall Estate, subsequently creating 20,000 sq.ft of office space for JBA Consulting and JBA Risk Management. Broughton Hall wished to create new office facilities in addition to the existing business park on the main estate.

There are current shifts within the work place which are not trends but cultural changes to enhance the psychology of work spaces and migration around the office, resultingly increasing productivity for employees. JBA took on a few of these ideals with agile working, hot desking and a strive for a healthy workplace. This influenced the approach Watson Batty took in order to ensure the design would work for both sides of the company; Consulting requesting a more traditional way of working in terms of desking stations whilst Risk adopted more of an agile approach.

The newbuild horseshoe shaped two storey building is set amongst the Yorkshire countryside. The office is clad in timber shingles, has a zinc roof and is set into the surrounding fields; thus blending in and being sympathetic to its environment whilst striking at the same time.

Centrally, there is a hub of agile working with a mixture of furniture types to allow staff to work in a number of different ways dependant on the task at hand throughout the day. This is located next to a breakout zone and meeting rooms, helping to further facilitate collaboration between the two elements of the company.

The rural location of the building set out a stall for the interior design approach with the client requiring a sleek modern office for their clients to visit alongside retaining the feel of the location in the countryside. Muted tones with occasional bold colours integrated on furniture and bespoke joinery screens against statement textured flooring such as Bolon Shapes create a contrast to the lacquered ply finish on all walls.

Although appointed by JBA, WBA were also appointed by Broughton Hall to help with ‘landlords’ interior design such as the WC’s etc ensuring the design was cohesive and helped the transition from main build to handover, allowing the internal fit out to run smoothly in terms of designs.

The internal fit out works were completed at the end of March 2019 and JBA moved in a few weeks later, with positive results already showing. The company is benefitting from being in one office space, coming together in the agile/breakout spaces and learning what all elements of the business do.

“Thank you for your efforts and inspiration in making the new office such an attractive place to work“, Bill Schlegel, JBA Group. 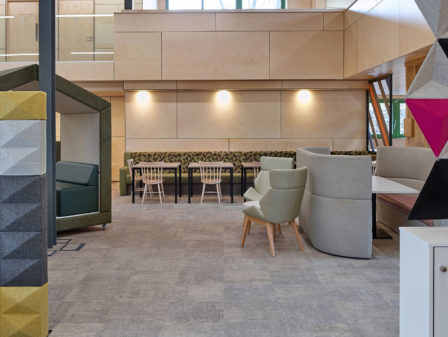